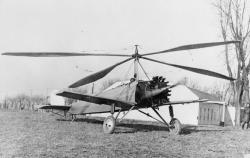 On December 18, 1928, Arthur Rawson, a factory pilot for the Cierva Autogiro Company, and then Harold F. Pitcairn, flew a Cierva C.8W Autogiro from Building #3 at Pitcairn Field #2. The flights marked the first time a rotary-wing aircraft was successfully flown in the U.S. The success of the flight convinced Pitcairn, the founder and president of the Pitcairn Airplane Company and Pitcairn Aviation (which later became Eastern Airlines), to establish the Pitcairn-Cierva Autogiro Company on the Willow Grove site. The company was later renamed the American Autogiro Company. The site is considered the cradle of American autogiro design.

In 1930, Pitcairn and his engineers won the Robert J. Collier Trophy for his autogiro designs. Pitcairn’s original designs, including the PCA-2, PAA-1, PA-18, PA-19, AC-35, and PA-36, developed the technology that made the invention of the helicopter possible.