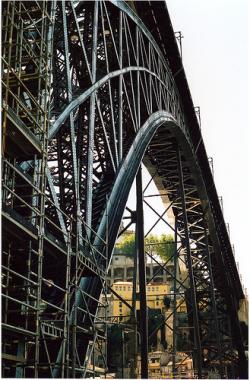 Built to cross one of the steepest valleys along the Douro River, the Ponte Maria Pia was the first major work to emerge from the French firm of Gustav Eiffel  and Company, establishing Eiffel as an important bridge designer and civil engineer of his day. Resting on a parabolic arch spanning 160 meters, the Ponte Maria Pia was the longest iron arch bridge in the world at the time of its construction. The bridge's latticework construction reflects the later design of the well-known Eiffel Tower, erected in Paris to commemorate the International Exposition of 1900.