The refrigeration units placed on trucks in 1938 by Thermo King Corp. revolutionized the transportation of perishable foods. Today they are a common sight on streets everywhere. Consumer demand for meat, poultry, produce and dairy products increased at an astounding rate. These installations and subsequent ones on refrigerated vehicles, ships, and railroads have had worldwide impact on the preservation of food and other perishables during distribution. Today more than three quarters of the food through the United States alone is shipped and stored under refrigeration, with a frozen food industry having annual sales in excess of $40 billion. In addition to food, refrigeration makes available more delicate cargo such as photographic film, pharmaceuticals and flowers.

The Model "C" was the first self-contained unit designed for placing on the front wall of a truck or semi-trailer. Joseph A. Numero, once a manufacturer of sound systems for movie theaters, turned to Frederick M. Jones, a self-taught mechanical engineer (later Thermo King's vice president of engineering) who worked up an initial design from junkyard salvage. The challenges were to build a structural frame and refrigerant tubing connections that would withstand the constant pounding of road vibrations. The patent (#2,303,857) was applied for on November 16, 1939. The first two models were workable but mounted under the trailer and were on the road by 1942 in several states.

Civilian applications during World War II expanded its uses to various vehicles, warehouses and shelters. Refinements led to the Model C, which was in production throughout the 1940s (patent improvements were granted in December 1943). It is a self-contained, front-mounted (usually seen above the cab), weighing far less with more efficiency.

The landmarked unit (Serial No. 198) was purchased by L. B. Hartz Wholesaler in Thief River Falls, Minnesota, in 1940, and donated to a dealership in St. Paul before being returned to the world headquarters in Minneapolis for display.

The National Medal of Technology was awarded to Jones and Numero, presented posthumously on September 16, 1991. 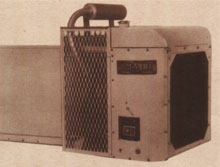