Nicholas Montgomery Powers built the bridge. It was first constructed behind the village, then taken apart and reassembled over the stream. Some residents questioned the idea of re-constructing it, but Powers was so confident of the bridge's durability that he sat on the roof when the final trestles supporting it were removed. From his perch he reportedly said: "If the bridge goes down, I never want to see the sun rise again!"

The Old Blenheim Bridge over the Schoharie Creek is the longest single span covered bridge in the world. It is one of just six two-lane or "double-barrel" covered bridges that still exist in the U.S. An unusual feature of the bridge is the single center wooden arch from which the bridge derives additional strength. It spans in a three-rib segment from the abutments on each side of the river to the middle of the roof ridgepole. Three trusses flank the bridge's two lanes creating a double-barrel bridge.

Due to severe flooding, three approach spans have been added over time to bridge gaps between the eroded riverbank and the abutments. The first two, made of wood, were built in 1869 and 1887. An iron span was added in 1895, but in 1930 it cracked beneath a heavy load of ice. A new steel bridge was erected 100 feet from the Old Blenheim Bridge in 1932, and The County Board of Supervisors voted unanimously to retain the original bridge as a historic relic.

Note : Unfortunately, the Blenheim Bridge was completely destroyed by Hurricane Irene in August 2011. 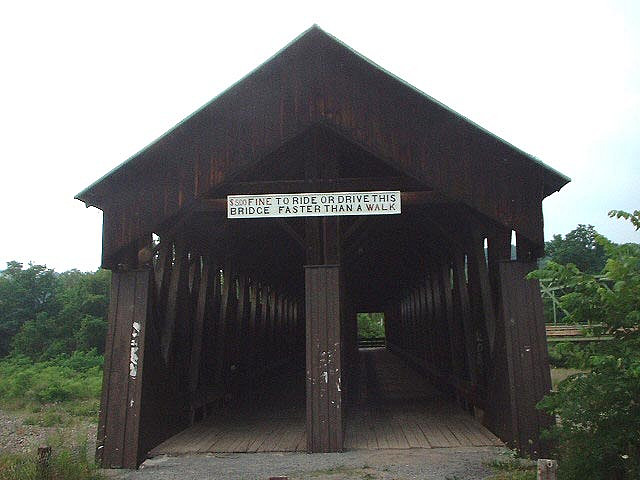