For more than 174 years, the Canton Viaduct has stood as a dominating structure on the New England landscape. When completed in 1835, the slightly curved, granite masonry bridge - 615 feet long, 70 feet high, and 22 feet wide - carried a single track of the Boston and Providence Railroad, providing a critical link in the establishment of rail service between Boston and New York. In 1860, a second track was added. With few major alterations, the viaduct has continued to provide safe rail transportation to heavier and faster loads throughout the 20th century.

Beginning in the early 1990s, the viaduct underwent a rehabilitation effort aimed at retaining its historic integrity while making it safe for modern, high-speed rail service.  Following restoration, the viaduct has continued to serve as crucial transportation link into the 21st century, helping to provide 150 mile-per-hour, electrified, passenger rail service between Boston and Washington, D.C. 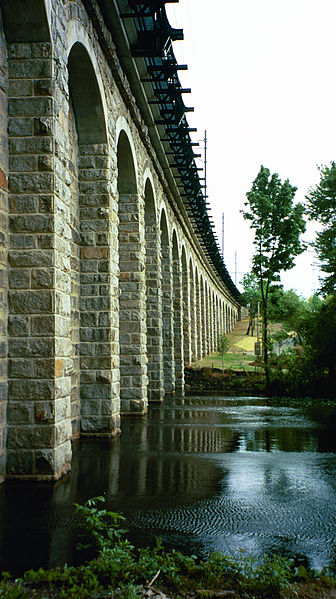