Like other American cities in the late 19th century, Baltimore had grown so quickly its supply system was unable to provide city residents with a dependable supply of water. Two reservoirs built outside the city helped increase capacity, but heavy rainfalls in the largely agricultural area tended to foul this additional water supply. City officials elected to construct a holding reservoir within the city - contained by an earthen dam - where silty water would be allowed to settle. No such project had ever been undertaken in the United States.

The site chosen was a ravine in Druid Hill Park, a public city park that contained a small stream. Beginning in 1864, Robert K. Martin, a civil engineer for the Baltimore Water Department, oversaw the design and construction of a 119-foot dam built with materials excavated from the reservoir bed. Orchestrating a careful sequence of construction steps and using readily available construction equipment, Martin pioneered design principles and building methods still in use today.

1. Druid Lake Dam was the first earthen dam more than 100 feet in height built in the United States. It quickly became the forerunner of many similar projects around the country.

3. A key element of the dam's construction was the economical handling of materials. Earth and clay were transported directly to work areas from their excavation sites on temporary railroad tracks that were taken apart and relocated as work progressed.

4. The dam is anchored by a five-foot-tall stone wall extending the dam's entire length -- four feet thick at the base tapering to two feet at the top, and set into solid rock. The wall, described by Robert Martin as the "tooth" of the dam, was meant to stabilize the whole structure against lateral pressure while providing an impervious barrier to water seepage.

5. The core of the dam, 36 feet thick at its base, surrounds the stone wall and was made from compacted clay found at the site. The banks that encase the core on each side were constructed of compacted earth in six-inch layers, using rollers drawn by four-horse teams to compress the embankments.

6. The upstream face of the dam has a 4:1 slope and the downstream face a 2:1 slope. Both were carefully finished in three-inch layers of compacted earth. 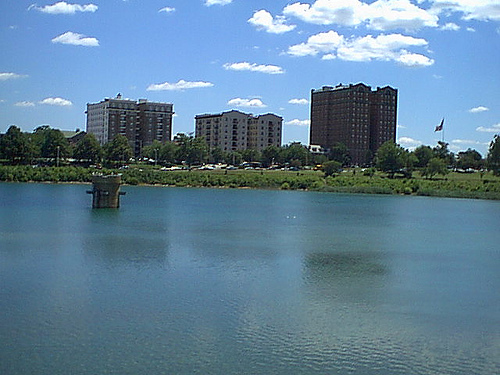