Put in service in 1937, this world-renowned bridge, conceived by Joseph Strauss and designed largely by Charles Ellis, was the longest single span (4,200 feet) in the world for a quarter century.

As with many civil engineering projects in their conceptual stages, naysayers scoffed at the Golden Gate Bridge. They said it would be technically unfeasible or too expensive to bridge the Golden Gate, a 1.7-mile-wide opening separating the Pacific Ocean from the San Francisco Bay. They said that the channel was too deep; the tides and winds too strong; the span too long.

Bridge designer Joseph Baermann Strauss  believed such a bridge was not only feasible, but could be built for just $25 to $30 million. Out of 11 proposals from bridge engineering firms across the country, Strauss' was selected and he became Chief Engineer. Final engineering plans were submitted on August 27, 1930, and construction began in November 1932.

In what would become one of the safest construction job sites in its time, Strauss and his team of engineers and consultants, along with a dedicated staff of thousands of builders and workers, built one of the boldest, most spectacular bridges ever. 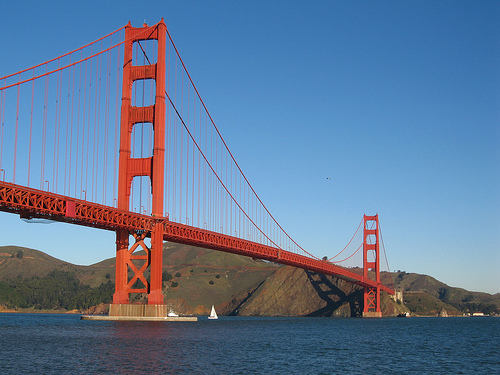