The early people of Costa Rica in the present-day area of Turrialba in Cartago Province built this ceremonial center with care and precision, and it is the country's primary and most important archaeological site. The Guayabo National Monument is of international significance because of its extensive roadways, retaining walls, underground channels, water supply, and flood control and drainage facilities that represent early civil engineering achievements by pre-Columbian people.

The site is located on a high plateau between two deep river gorges about 19 km (12 mi) northeast of Turrialba, which is about 70 km (44 mi) east of Costa Rica's capitol, San Jose. The site was first investigated in 1891 but it was not until 1968 that actual archaeological work was begun, under the direction of Professor Carlos H. Aguilar Piedra of the University of Costa Rica. The site is located at an altitude of about 1100 m (3,600 ft). The center housed as many as 1,500 to 2,000 people within its 20 hectares (49 acres).The monument currently encompasses a total of 233 hectares (576 acres).

Wooden structures were constructed on raised circular stone foundations, and the houses and buildings are believed to have been conical in shape. Large quantities of stone were brought to the site to build the foundations, as was well as roads and causeways up to several kilometers long, walkways, stairways, retaining walls, and plazas. Constructed water features included both surface and underground canals and channels, tanks, and ponds for fresh water supplies, as well as ditches and channels for drainage. Probably due to its geographic position, construction techniques used at the Guayabo site reflect both South American and Mesoamerican influences.

Tags: Era: BC
Innovation designated by: 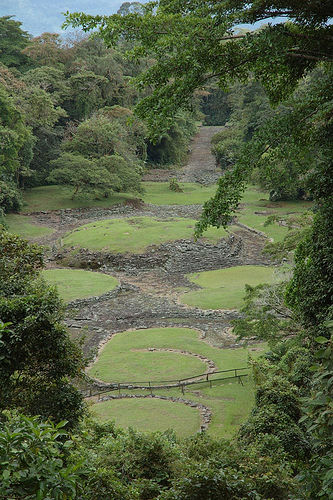