Conceived in the early years of World War II as a plan to bury four fuel containers horizontally in a hillside at the U.S. Navy facility at Pearl Harbor, Hawaii, the Red Hill Underground Fuel Storage Facility ultimately encompassed the design and construction of 20 vertical storage tanks - each large enough to contain a 20-story building - buried in the volcanic hillside and connected by tunnels to a harbor-side pumping station more than two-and-a-half miles away.

Using existing rock as a construction shell, the project made use of innovative mining and construction methods that included building each tank from a central vertical shaft drilled 30 feet in diameter and removing all excavated rock through an elaborate system of conveyor belts specially made by the Goodrich Tire Company. Protecting more than 250 million gallons of fuel used by Navy fleets around the world, the Red Hill facility has operated virtually unchanged since its completion. 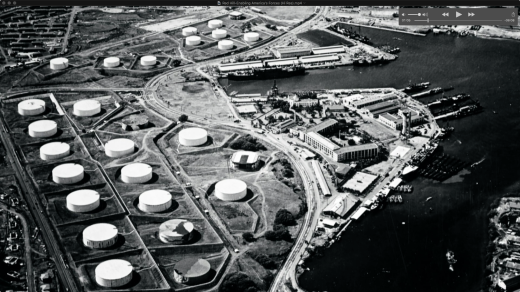