This majestic viaduct was built during the golden age of railroading. It was at the western end of a major readjustment in grade and alignment of the Erie-Lackawanna Railroad, and had double tracks to carry the trains across the valley of Tunkhannock Creek. The Hallstead cutoff (between Scranton, Pennsylvania and Hallstead, New Jersey) reduced passenger travel time by 20 minutes, and freight travel time by over an hour.

Designed by A. Burton Cohen, the 2,375-foot-long concrete arched railroad bridge was, upon completion, the largest concrete bridge in the world. The double tracks of the new line traversed the valley 240 feet above the streambed. Today, freight trains still regularly use the Tunkhannock Viaduct. 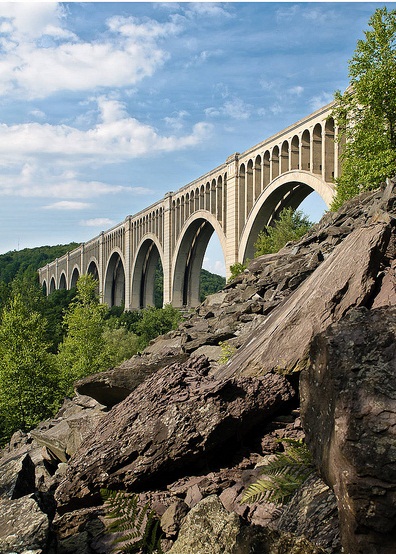