The USS Albacore (AGSS-569) represented a radical change in submarine design. The hull was designed with underwater speed as the prime requirement, and it was built with newly developed high-strength steel (HY-80). In addition to these two major innovations, the Albacore served as a test vessel for many new designs in submarine technology so that they could be refined before implementing them into the fleet. Among them was the testing of various control designs and correlation of actual sea-trial performance with that predicted in tow-tank tests.

The Albacore was the first navy-designed vessel with a true submarine hull form in which the surface characteristics were subordinated to requirements of underwater performance. The unique teardrop-shaped hull design, the result of year of extensive model testing, led to two new underwater speed records with improved control. To determine the shape for the outer hull, extensive testing was conducted at David Taylor Model Basin (also a landmark). The original shape was based on the form of the R101 dirigible from World War I and refined using large-scale models in wind-tunnel testing. During nineteen years of service, the Albacore carried out tests of speed, depth changes, and underwater maneuvering. Its design innovations were adopted for all US Navy submarines that followed.

The Albacore was built unarmed, initially for target practice, as proposed by Rear Admiral Charles Momsen, Assistant Chief of Naval Operations for Undersea Warfare.  She was launched on August 1, 1953, and commissioned on December 5, 1953. Her motto is Praenuntius Futuri (Forerunner of the Future). Her mission was experimental, modification upon modification in a series of configurations designed to test submarine hyrodynamics. She underwent five re-fits or phase conversions. The marriage of the hull form pioneered on the Albacore with nuclear power technology resulted in the USS Nautilus, the first submarine capable of sustained underwater performance.

The Albacore was decommissioned on September 1, 1972, and placed in the reserve fleet in Philadelphia. In 1982, a citizens group mobilized an effort to return the vessel to Portsmouth as a tangible monument to the area's naval heritage, and she was towed back in 1984. On May 3, 1985, the Navy transferred responsibility for the submarine to the Portsmouth Submarine Memorial Association. The permanent display site is a quarter mile inland, set on a cradle, land-locked. The museum opened to the public August 30, 1986. 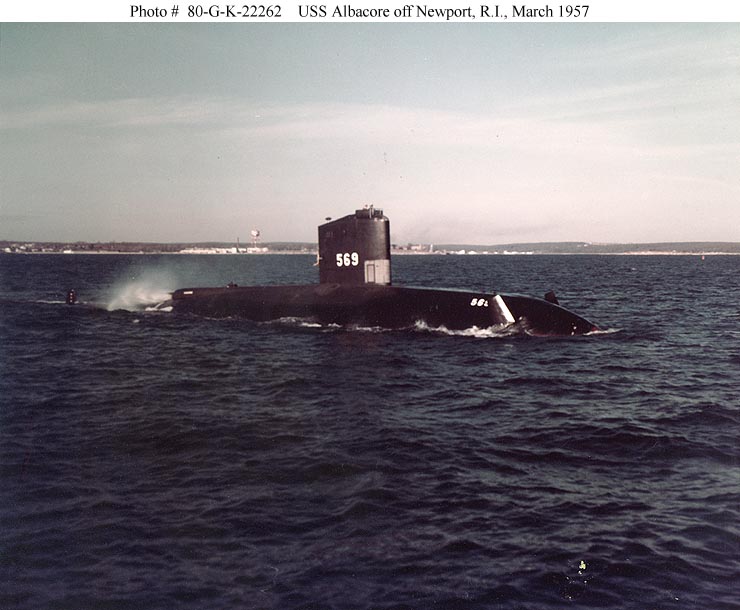