McCormick was born on the 620-acre farm known historically as “Walnut Grove Farm” in 1809.  He built the first practical grain reaper, which was successfully demonstrated in a field of oats owned by John Steele in nearby Steeles Tavern in 1831.

Patented in 1834, the reaper is credited for starting the mechanical revolution in agriculture that would forever change agricultural production worldwide.  From a meager beginning in a small blacksmith shop in Steeles Tavern evolved a company that would grow to become one of the world’s manufacturing giants, the International Harvester Company.

The descendents of Cyrus McCormick retained ownership of the farm until 1954 when they donated it to Virginia Tech. Soon after, a two-acre site including the gristmill, 1822 manor house, smokehouse, schoolroom, housekeeper’s quarters, and blacksmith shop were set aside as the McCormick Memorial Plot.

In 1956, the Cyrus McCormick exhibit from the Virginia State Museum in Richmond was relocated to the second floor of the blacksmith shop.  Included in this display are 14 miniature models of the McCormick reaper that are similar to those used by McCormick salesmen in the late 1800s.  In June 1966, the memorial area was designated a National Historic Landmark and Virginia Wayside site.

McCormick's farm is maintained by the Shenandoah Valley Research Station,  a branch of the Virginia Agricultural Experiment Station of Virginia Tech.  It is toured by thousands of visitors every year. 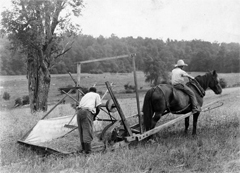