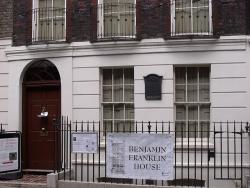 Society
IEEE
Main Category
Electrical
Sub Category
People and Organizations
Era
1750-1799
Date Created
1757-1775
Location Country
us
Coordinates
51.507674, -0.124887
Address1
Franklin House Museum
Address2
36 Craven Street
City
London
State
England
Country
UK
Zip
WC2N 5NF
Website
http://www.ieeeghn.org/wiki/index.php/Milestones:Benjamin_Franklin%27s_work_in_…
Creator
Franklin, Benjamin
"Benjamin Franklin, American electrician, printer, and diplomat, spent many years on Craven Street. He lived at No. 7 between 1772 and 1775 and at No. 36 from 1757-1762 and again from 1764-1772. During these years, Franklin popularized the study of electricity, performed experiments, and served as an adviser on lightning conductors." (The plaque may be viewed at the Franklin house museum at 36 Craven St, London, England.) Franklin, considered one of the founders of modern Physics, was already a famous scientist when he arrived at Craven Street in 1757. He resided there for 16 years. In the room behind his parlor, Franklin constructed a laboratory for his research. Here he continued his electrical experiments. He proved that electricity has a positive and a negative charge, invented an improved generator and storage batteries. Franklin had proved that lightning is electrical. He had flown metal-tipped kites during thunderstorms and "captured the fire of heaven". He continued these experiments, sending kites aloft along the Thames during thunderstorms. By experimenting with different metals and shapes he was able to perfect his famous lightning rod conductor. This was such a success that Lightning Rods were placed on St. James's Palace (greatly to the annoyance of George III) and on the other great State buildings, churches and cathedrals in London. At Craven Street, Franklin perfected his famous Stove, which is still in wide use today. It burns its own smoke and saves fuel. During a hot London summer Franklin invented the Air Bath, the forerunner of Air Conditioning.
Tags
Benjamin Franklin
Physics
Craven
London
Stove
Air Bath
Air Conditioning
Generator
Charge
Electricity
Thunder
Storm
Kite
Lightning
Rod
London, England, Dedicated 31 March 2003 - IEEE UKRI Section
Image Credit
Courtesy Flickr/Elliott Brown (CC BY-SA 2.0)
Image Caption
The Benjamin Franklin House on Craven Street in London, where Franklin lived for 16 years, and where he did much of his most famous work. Converted into a museum.