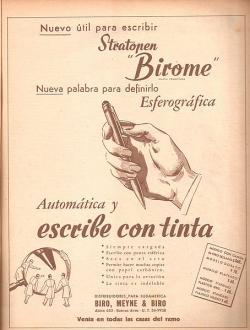 Society
ASME
Main Category
Mechanical
Sub Category
Manufacturing
Era
1930-1939
Date Created
1938-1948
Location Country
us
Coordinates
-34.573787, -58.442315
Address1
Ciudad de la Paz 394
City
Buenos Aires
Country
Argentina
Zip
1426
Website
http://www.asme.org/about-asme/history/landmarks/topics-m-z/manufacturing---2/-…
http://files.asme.org/asmeorg/Communities/History/Landmarks/10389.pdf
Creator
Biro, Ladislao Jose
The ballpoint pen invented by Ladislao Jose Biro was originally patented in Hungary in 1938. The principle of the ballpoint pen was originally patented by John Loud in 1888 for a product to mark leather and in 1916 by Van Vechten Riesberg, but neither of these products were exploited commercially. As a journalist, Biro was inspired by the concept of quick-drying ink in a print shop. He thought of a new type of pen that could use quick-drying thick ink, rather than the thin, wet, ink used in fountain and quill pens. Since an ordinary nib would clog thick ink, Biro worked with the idea of a tiny metal sphere rotating in a capillary tube, allowing a quick-drying ink to flow by the force of gravity. Biro’s early designs applied mechanical pressure to the ink column to make the ink flow, but his original idea of gravity succeeded in 1943, when technological advances improved the quality of the parts and the ink. The current design of the ballpoint pen is virtually unchanged from Biro’s original idea. He patented his invention in several countries: Budapest, 1938 (No. 120037); Switzerland, 1939 (No. 204880); Argentina, 1940 (No. 51454), 1947 (No. 57892); United States, 1944 (No. 2400679), 1948 (No. 547758). Biro’s ballpoint pen was first marketed in Argentina in 1944 by Biro, Manye, Biro, from which the Birome pen’s name was derived. It later changed its name to EterpenCo. The European BIC company most famously manufactured and sold ballpoint pens, in Europe and North America. They are responsible for the worldwide popularity of the ballpoint pen, but not its invention. The collection of some of the original models of Biro ballpoint pens was donated by the Biro Foundation to an exhibit at the Centro Argentino de Ingenieros in Buenos Aires, Argentina.
Tags
Biro
Birome
Ink
Ballpoint
Pen
Loud
Loud
Image Credit
Courtesy Wikipedia/(CC BY-SA 2.5)
Image Caption
A 1945 Birome Ballpoint Pen advertisement in an Argentine magazine known as Leoplán