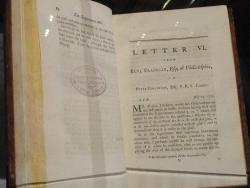 Society
IEEE
Main Category
Electrical
Sub Category
Fields, Waves & Electromagnetics
Era
1750-1799
Date Created
1751
Location Country
us
Coordinates
39.948622, -75.149368
Address1
American Philosophical Society Library
Address2
105 South Fifth Street
City
Philadelphia
State
PA
Country
USA
Zip
19106
Website
http://www.ieeeghn.org/wiki/index.php/Milestones:Book_%E2%80%9CExperiments_and_…
Creator
Franklin, Benjamin
In 1751 Benjamin Franklin published “Experiments and Observations on Electricity, Made at Philadelphia in America.” Experiments summarized in this booklet determined the existence of positive and negative charges, and the difference between insulators and conductors. This work led to the invention of the lightning rod. Its complete construction was popularized in Poor Richard’s Almanack in 1753. This is the first practical engineering application of electricity. A unifying theory covering static electricity, lightning, and stored charge was invented. Recognition was immediate; Franklin received the Copley Medal in 1753. Literally, Franklin invented this in a provincial place when compared to London. The colonies were a backwater. Equipment had to be imported by sailing ship. Until his work was accepted by the Royal Society, it was not accepted knowledge. Jean Francois Dalibard experimentally confirmed that that lightning was electricity in Paris in May 1752. Franklin wrote a letter to Joseph Priestly in 1772 that described his 1752 test of using a kite with a key at ground level connected to a Leyden Jar to prove the theory. Electricity changed from a parlor demonstration to a science. The lightning rod is the engineering achievement connecting science to public safety. Bernard Finn, writing in The Proceedings of the IEEE (Vol. 64, No. 9, September 1976, p.1271) said that, “His own powers of reason led him quickly, by the spring of 1747, to the hypothesis that all matter normally contained a certain amount of electrical fluid, and that the particles of this fluid were attracted to particles of ordinary matter but repelled from each other. Bodies with too much fluid would therefore repel each other; and a body with an excess would be attracted to a body with a deficit. From such a concept arouse the terms positive and negative, plus and minus.”
Tags
Book
Experiment
Electricity
Benjamin Franklin
Philadelphia
Kite
Observation
Insulator
Conductor
Copley
Philadelphia, Pennsylvania, U.S.A., Dedicated 7 August 2009 - IEEE Philadelphia Section
Image Credit
Public Domain (Author's Choice)
Image Caption
"Experiments and Observations on Electricity" by Benjamin Franklin, currently located at the American Philosophical Society Library