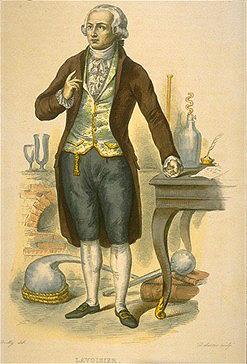 Antoine-Laurent Lavoisier studied at the Académie des Sciences de l'Institut de France (then "Collège Mazarin") from 1754 to 1761. He was elected to the Royal Academy of Sciences in 1768, where he presented his important studies on oxygen in chemistry. These began with a "pli cacheté" of Nov. 2, 1772, and, after he experimentally proved the chemical composition of water by the quantitative method, culminated in his abandoning of the phlogistic theory in 1785. In 1787, he proposed the principles of a new Méthode de Nomenclature Chimique, in collaboration with the chemists Guyton de Morveau, Berthollet, and Fourcroy and with the help of the mathematicians Monge and Laplace. The publication of his Traité Elémentaire de Chimie two years later convinced French and foreign chemists of his theories. His papers, stored in the Archives of the Academy of Sciences, bear witness to the conception and maturing of his revolutionary ideas, which are at the foundations of modern chemistry.