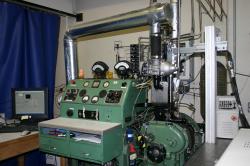 The Cooperative Fuel Research (CFR) engine is used extensively throughout the world for testing, research, and instruction in the performance of fuels and lubricants for the internal combustion engine. Principal design work on this prototype engine was accomplished by engineers of Waukesha Motor Company, now a division of Dresser Industries, who served on a Cooperative Fuel Research Committee with representatives of the American Petroleum Institute, Society of Automotive Engineers, Automobile Manufacturers Association, and the National Bureau of Standards. The first commercial CFR engine was designed and built in forty-five days, beginning in December 1928, as a standardized single-cylinder engine to be used for developing a gasoline knock-test method. First effective in creating a recognized standard for defining fuel quality, the engines are relevant today for basic research in exhaust emissions and alternate fuels suitability. The knock test procedures originally developed by the CFR committee are now maintained by the American Society of Testing and Materials.