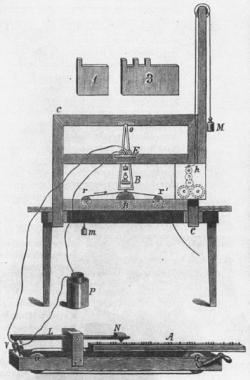 Society
IEEE
Main Category
Electric
Era
1830-1839
Date Created
1838
Location Country
us
Coordinates
40.796723, -74.481647
Address1
Historic Speedwell Park
Address2
333 Speedwell Ave
City
Morristown
State
NJ
Country
USA
Zip
07960
Website
http://www.ieeeghn.org/wiki/index.php/Milestones:Demonstration_of_Practical_Tel…
Creator
Morse, Samuel F. B.
Vail, Alfred
In January 1838, Samuel F. B. Morse and Alfred Vail first demonstrated publicly crucial elements of their telegraph system, using instruments that Vail had constructed during the previous months. Electrical pulses, transmitted through two miles of wire, caused an electromagnet to ink dots and dashes (grouped to represent letters and words) on a strip of paper. Commercialization began in 1844 when funding became available. A ministerial student, a professor of fine arts, and a prominent industrialist... this trio proved over 160 years ago, at Morristown, New Jersey, that something they called "telegraph" could actually be made to work. Alfred Vail was the student, In September 1837, while visiting New York University, his alma mater, he came upon Professor Samuel F.B. Morse, the artist-inventor, demonstrating his "Electro-Magnetic Telegraph", an apparatus that could send coded messages through a copper wire using electrical impulses from an electromagnet. Young Vail, skilled in mechanics, saw the machine´s great potential for communications and offered to assist Morse in his experiments for a share of the invention´s profits. Morse, at the time an unpaid professor at the University, needed financial support and a place to work. He was delighted when Vail persuaded Vail´s father, Stephan Vail, a well-to-do industrialist and a county judge, to advance $2,000 to underwrite the cost of perfecting the machine. He allowed them room in his Speedwell Iron Works at Morristown for their experiments. Then, while Morse continued to teach in New York, Alfred went to work eliminated errors from the telegraph equipment. Alfred Vail had a written agreement with Morse to produce a working, practical telegraph, at Vail´s expense, by 1 January 1838. While his father fussed and fumed over what he began to think was a waste of time and money, the younger Vail and his assistant, William Baker, worked feverishly behind closed doors to meet the deadline. Morse, an infrequent visitor, kept track of their progress, mostly by mail. 1 January 1838 came without a completed, working model. Morse, now on hand, became insistent. The Judge became impatient. Alfred knew if success didn´t come soon his father would cut off his financial support and the experiments would end. On 6 January 1838, the telegraph was ready for demonstration. Alfred and Morse invited the Judge to the workshop. The Judge wrote down a sentence on a slip of paper and handed it to his son. Alfred sat at the telegraph machine, manipulated metal knobs and transmitted, by code of numbers, the Judge´s message. (Each number corresponded to a word in the dictionary.) As the electrical impulses surged through the two miles of wire looped through the building, Morse, at the distant end away from the Vails, scribbled down what he received. The message read, "A patient waiter is no loser".
Tags
Telegraph
Morse
Vail
Communications
Image Credit
Courtesy Wikipedia
Image Caption
The original Samuel Morse telegraph