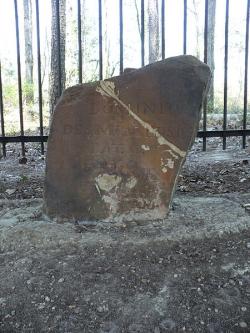 Ellicott's Stone is one of the most important early boundary markers in the history of the Americas, demarking the boundary between Spanish and U.S. territory. The location of Ellicott's Stone was the result of the 1795 Pinckney Treaty (formally called the Treaty of San Lorenzo) between Spain and the U.S. In it, both countries agreed that 31 degrees north latitude-about midway up Alabama-would be the east-west boundary between U.S. Mississippi Territory and Spanish West Florida.

Sir William Dunbar performed the survey east of the Mississippi on behalf of Spain.  Major Andrew Ellicott was appointed by fellow surveyor, President George Washington to establish the international boundary starting at the Mobile River and working toward the Atlantic.

The historic stone marker was placed in 1799 near the bank of the Mobile River where the 31st parallel was considered to be. The parallel remained the boundary for only 14 years, until America obtained Mobile from the Spaniards in 1813.

Facts
1. The Pinckney Treaty included provisions that the boundary would be surveyed and marked to end further disputes. Spain, however, was disappointed to find that both Natchez and the then-thriving community of St. Stephens Alabamas early capitol would be on the U.S. side. Spain consequently conducted political maneuvering to delay the survey. Work was held up for three years; but in 1798, the U.S. insisted that the surveying begin.
2. Ellicott and his survey crew encountered many obstacles, including rough terrain, dissident laborers, nearly impenetrable swamps, and Indian attacks. Using homemade surveying instruments and the stars for guidance, he was able to place the stone just 500 feet south of the true 31st parallel.
3. This survey established the basis for many later surveys including the St. Stephens Meridian and the St. Stevens Baseline.