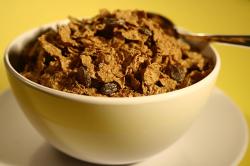 In 1894, Dr. John Harvey Kellogg and his brother, Will Keith (W.K.) Kellogg, were making a granola type cereal for their patients in the Battle Creek Sanitarium, a general health facility in Michigan. This granola cereal was made from wheat that was boiled, rolled into a sheet, toasted, and ground. They accidentally left a batch of boiled wheat stand overnight before passing it through the rolls. The individual grains were subsequently pressed into flakes which were toasted to form the first flaked cereal. Two years later, W.K. Kellogg made the first corn flakes. In 1906, he formed the Battle Creek Toasted Flake Company, which was renamed the Kellogg Company in 1922. The flaking process developed by the Kellogg brothers continues to serve as a basis for modern flaked cereal manufacturing processes. Flaked cereals have become a widely accepted form of breakfast cereals in many countries.