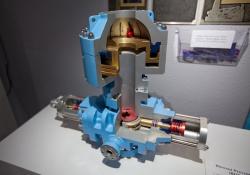 Society
ASME
Main Category
Mechanical
Sub Category
Minerals Extraction & Refining
Era
1920-1929
Date Created
1922
Location Country
us
Coordinates
29.834865, -95.559813
Address1
Cameron World Headquarters
Address2
4601 Westway Park Blvd
City
Houston
State
TX
Country
USA
Zip
77041
Website
http://www.asme.org/about-asme/history/landmarks/topics-m-z/minerals-extraction…
Creator
Abercrombie, James
Cameron, Harry
This mechanism allowed the manual closing of a well, saved lives and prevented surface oil accumulation at drilling sites, quickly becoming an industry standard. In the early days of oilfield operations, there was no way to control the underground pressures encountered during drilling. When an oil or gas reservoir was tapped, wells were allowed to "blow out" until pressure was reduced sufficiently to allow capping. Many inventors attempted to develop a device to control such blowouts. In 1922, oil wildcatter James Smither Abercrombie (1891-1975) and machinist Harry S. Cameron (1872-1928) developed a successful ram-type blowout preventer (BOP) utilizing a small number of simple, rugged parts. It was installed on the wellhead, and the rams were closed to seal off the well, allowing full control of the pressure during drilling and production. The original design could withstand pressures up to 3,000 psi, an industry record in 1922. (In comparison, today's BOP can withstand 15,000 psi, working in water depth up to 10,000 feet.) Once nearly a victim of a disastrous blowout himself, Abercrombie had taken his idea for a ram-type preventer to Cameron's machine shop in Humble, Texas, where they worked out the details, starting with a sketch on the sawdust floor. They filed a patent application on April 14, 1922 (granted January 12, 1926, US Patent no. 1,569,247). A patent improvement (1,498,610) eliminated leakage in the early design. Tests and improvements led to a marketed product in January 1924. The MO BOP is not in use today, having evolved considerably over 80 plus years. The original MO BOP was displayed at the Smithsonian's energy center in the early 1980s, and it was returned to Cameron headquarters, Houston, where it is now on display in the lobby.
Tags
Ram-Type
Blowout Preventer
BOP
Oil Drilling
Wildcatter
Abercrombie
Cameron
Wellhead
Pressure
PSI
PSI
Image Credit
Original Image: Flickr/Ed Schipul (CC BY-SA 2.0)
Image Caption
A modern Blowout Preventer (BOP)