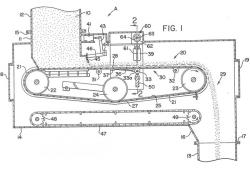 A variety of mechanical feeders, including drag-chain conveyors and rotary pocket feeders, historically have been used to volumetrically control the flow of fuel to coal pulverizers on power generators. Most power generation in the United States has relied on burning fossil fuels in steam boilers, with coal as the fuel of choice. By the 1920s, pulverized-firing (the burning in suspension of finely ground coal particles) evolved as means to more complete fuel combustion and higher system efficiencies and facilitated the use of larger boilers.

In the 1950s, Arthur J. Stock (1900-1986) successfully combined the weighing and control of material flow into a single device, now known as the gravimetric feeder. The first installation was placed in continuous operation at Niagara Mohawk Power Corporation's Dunkirk Station in 1957.

Ralph Hardgrove, a Babcock & Wilcox retiree who joined Stock Equipment Company in 1961 (at 70 years of age), led the feeder's development into general industry acceptance by the mid-1960s, when most large coal-fired boilers included gravimetric feed systems in their design.

The first Stock gravimetric feeder operated from 1957 to 1992, to be replaced by current gravimetric microprocessor-controlled design. This feeder was donated to Stock Equipment, refitted, and refurbished for public display in the engineering plant.