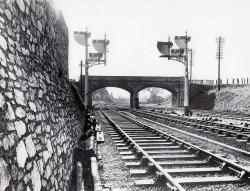 Isambard Kingdom Brunel, who had helped his father build the Thames Tunnel and who had been appointed engineer for the Clifton Suspension Bridge, was among the many applicants for the engineer-in-chief on the new railway. In March, 1833, the 27-year-old Brunel was chosen to superintend the construction of the Bristol-London railway, which in the same year adopted its "Great Western Railway" (GWR) as the corporate identity it would retain until consolidation into the nationwide British Railways system in 1948. It was the first major civil engineering work to be designed, directed, and completed by Brunel. Parliment officially established the company in 1835 and construction began the next year.

Brunel's route ran north of the Marl-borough Downs via Reading, Swindon, and Bath. He selected this northern course because it offered easier gradients and because it would readily allow later extensions to Oxford, Gloucester and South Wales. West of Reading he laid out the railway to follow the Thames River and pass through the valley of the Chilterns. For a distance of 77 miles the track would gradually gain elevation as it proceeded west to Swindon, never exceeding a gradient of 0.15 in 100 (8 feet per mile). From Swindon, the descent to Bristol was to be made over two short gradients of 1 in 100 (52.8 feet per mile). One of these would be in a tunnel through the Box Hill east of Bath.

Portions of the GWR opened as they were completed, beginning with the 24-mile London Paddington-Taplow section, which included the eight-arch Wharncliffe Viaduct, in 1838. Completion of the Maidenhead Bridge over the Thames, with its two, unusually flat, elliptical arches, allowed the line's extension to Twyford the following year. By December 1840, the railhead had reached Chippenham, where it crossed the center of town on another Brunel-designed arch viaduct. Almost appearing to be two separate structures, this viaduct includes six large and three small arches. While the railhead steadily advanced from the east, construction began onthe western section from Bristol to Bath, which also began service in 1840.

The last 24 miles between Chippenham and Bath - out of the total of 118 3/4 total between London and Bristol -  were the worst. This final stretch contained the famous Box Tunnel, considered by many at the time to be almost impossible to build or operate through. Brunel believed otherwise, and he intentionally chose a route that required a tunnel through Box Hill to maintain the most-favorable gradients over the entire line.

Box Tunnel was a major feat in those early days of railway engineering. At 1 7/8 mile, it was the longest railway tunnel in existence. The bore measured 30 feet wide at the spring of its arch with a crown 25 feet above the rails. For construction access, and later ventilation, Brunel sank six vertical shafts 30 feet in diameter and varying from 70 to 300 feet deep, along the alignment of the tunnel. They permitted excavations to proceed simultaneously at fourteen working faces. During the construction of the tunnel, workers used a ton of gunpowder and a ton of candles every week. Having taken five years to build at an average cost of &pound;100 per yard, Box Tunnel, along with the last portion of the GWR was finished in June 1841, and the ambition of the Bristol merchants to see trains running from London to Bristol was realized.

In Bristol, Brunel teamed with noted architect Matthew Digby Wyatt to design Temple Meads Station. Its Brunel-designed train shed featured a 72-foot-span hammerbeam roof structure-still the world's widest.  Although superseded by a newer station, the original building and train shed survive as a museum and car park, making the complex the world's oldest purpose-built railway terminus. Other notable works still in service on the line include Box Tunnel, Sonning Cutting near Reading, Maidenhead Bridge, Wharncliffe Viaduct, and Chippenham Viaduct.  London Paddington Station has been enlarged and modified over the years, but Brunel's 1854 three-span train shed remains essentially intact over platforms 1 - 8. These structures and the railway's overall alignment comprise a fitting tribute to one of civil engineering's boldest and accomplished practitioners.