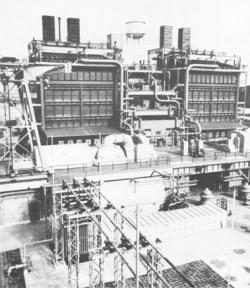 On April 21, 1949, a completely outdoor turbine-generator was placed into commercial operation at the Greens Bayou electric power plant--the first fully outdoor unit to operate in the United States. The demand for unprecedented quantities of electricity after World War II pressed utilities to provide addition power quickly. The outdoor design, unlike the traditional large turbine hall, resulted in significant reductions in the cost per kilowatt to build the plant. To remove protective housings, engineers dealt with issues such as the freezing of water-based systems, weather exposure, corrosion, and ease of maintenance access to sealed components. On- line lead time and maintenance was made easier and less expensive by outdoor plants.

This 66 megawatt turbine-generator at Greens Bayou was one of the earliest AIEE-ASME Preferred Standard units applied in the utility industry. Design engineer Walton Sinton was primarily responsible for the unit, incorporating side-mounted condensers that permitted lowering the floor and the use of a gantry crane on the turbine deck, which eliminated main structural steel supports required in turbine halls. It was Westinghouse Electric Company's first outdoor preferred standard unit. Greens Bayou No. 1 was placed in service 21 months after the order date. As a result of its success, outdoor power plants were subsequently used at many other locations, even when exposed to hurricane force winds and torrential rains.

Predecessors to the Greens Bayou plant were built beginning in 1933, when General Electric installed a power plant in Schenectady, New York, which placed only the turbine and boiler outside. Greens Bayou was the first eliminate the removable cover and carry the outdoor concept to its logical conclusion by placing all components- -boiler, turbine-generator, condenser, and auxiliaries--outdoors.
The plant operated until December 31, 1986, closing after nearly 40 years of service. It is intact and operable in needed.