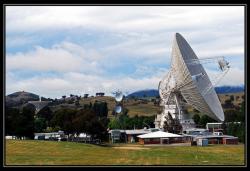 Established between 1967, the Honeysuckle Creek Tracking Station, along with the Tidbinbilla and Orroral Valley sites, supported NASA’s Deep Space Network, Manned Space Flight Network, and Spacecraft Tracking and Data Acquisition Network. The stations played a key role in supporting the Apollo 11 moon landing, with the Honeysuckle Creek facility providing the first historic pictures of man walking on the moon on July 20, 1969 (July 21st in Australia), as well as providing voice and telemetry contact with the lunar module. The Honeysuckle Creek station was closed in 1981 (and its 26m antenna moved to the Canberra Deep Space Communications Complex, as seen in the image) and the Orroral Valley facility in 1985, but the Tidbinbilla facility continues to provide invaluable support for interplanetary spacecraft missions and radio and radar astronomy observations for the exploration of the solar system, as well as for various earth-orbiting missions. The effort involved in the transmission of the lunar landing images by the Honeysuckle Creek facility and the radiotelescope at Australia’s Parkes Observatory are commemorated in the 2000 motion picture “The Dish.”