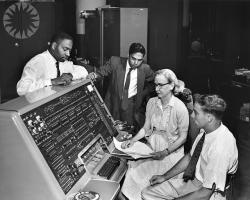 Society
SWE
Main Category
Women in Engineering
Sub Category
Computing
Era
1950-1959
Date Created
1959
Location Country
us
Coordinates
41.141675, -77.461964
Address1
University
Address2
401 N. Fairview Street
City
Lock Haven
State
PA
Country
USA
Zip
17745
Creator
Hopper, Grace Murray
A curious child who dissembled the clocks in her parent's home, Grace Hopper graduated from Vassar College with a B.A. in mathematics and physics. She continued her education at Yale University by completing a masters and Ph.D. in mathematics. She then returned to Vassar to teach. During World War II, Hopper joined the Navy and was sworn into the U.S. Naval Reserve in 1943. After training, she was commissioned as a lieutenant and assigned to the Bureau of Ordinance Computation Project at Harvard University. She became the third person to program the Harvard Mark I computer. Much like her clocks, disassembling it and figuring out its operating processes was a challenge that she really enjoyed. Hopper's naval duties ended a year after the war, and she became a senior programmer with Remington Rand, where she worked on the first large-scale commercial computer – UNIVAC. She became Director of Automatic programming in 1952 and subsequently oversaw the company's endeavor to produce specifications for a common business language. From 1959 to 1961, Hopper lead the team that invented COBOL (Common Business-Oriented Language), the first user-friendly business computer software program. Later, Hopper invested a great deal of time advocating validation procedures to bring about the international standardization of computer languages. She won numerous awards for her career as a famous woman inventor, including the National Medal of Technology, which was presented to her in 1991 by President George Bush. By the time she passed away on January 1, 1992, Dr. Hopper had received honorary degrees from thirty universities
Tags
Grace Murray Hopper
Grace Hopper
UNIVAC
U.S. Navy
Navy
COBOL
computer program
programming
program language
Image Credit
Courtesy of Smithsonian Institute
Image Caption
Grace Hopper sits at the UNIVAC Computer.