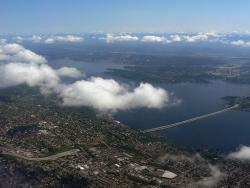 The original concrete floating bridge concept was developed by civil engineer Homer Hadley who spent more than ten years promoting the idea. Lacey V. Murrow, Chief Engineer of the Washington Toll Bridge Authority, studied and accepted Hadley's scheme and led the detailed design and construction of the project. Hadley was required to withdraw from further involvement because his close ties to the Portland Cement Association were thought to be a conflict of interest. Hadley would not receive credit for this innovative use of concrete until the parallel floating span was completed in 1989 and named in his honor in 1993, 26 years following his death.

Hadley and Murrow's floating bridge led to the construction of three similar bridges in the United States, two in Norway, one in Japan and one in Canada.  The bridge and tunnel project were key in improving eastern access to Seattle, a major commercial port on the eastern rim of the Pacific Ocean.