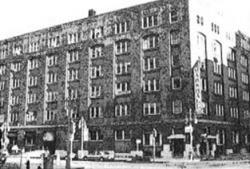 Designed by Claude A. P. Turner, a pioneer of reinforced concrete construction, the Marshall Building was constructed originally in 1906 as a five-story building. In 1911 the sixth floor of the building was added as per Turner's original design. This building is the oldest extant example of Turner's "mushroom" flat-slab system which transformed the design and construction of reinforced-concrete floors worldwide.

Turner's flat-slab system differed from previous reinforced-concrete construction in that it consisted of only a slab and supporting columns, eliminating the time and expense of formed beams on the underside of the floor. This new system was the subject of intense debate and controversy when it was introduced. But, due to Turner's persistent promotion, application, and defense of his system, it was embraced by the civil engineering community within a few years.

The flat slab design pioneered by C.A.P. Turner is still a common and popular design option in building construction. The construction methods developed and technology used for flat-slab buildings have contributed to the efficiency and versatility of the construction industry. Turner's design from the early 1900's is still a design of choice for many buildings in the United States. It is a safe and economical choice for building owners.

In addition to previously mentioned economies gained from this flat-slab design, other economies introduced included the following: