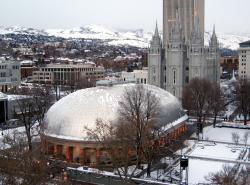 Just 20 years after settling the uninhabited Salt Lake valley, Brigham Young and his Mormon followers completed one of the nation's most impressive public structures. The 9,000-seat Mormon Tabernacle boasts a clear span roof measuring 150 feet by 250 feet, its timber trusses joined with wooden pegs and lashed with green rawhide, which shrank and tightened as it dried.

The building has remained structurally sound for more than 125 years and has seen few changes to its original design. It receives up to 3 million visitors a year and is home to the world famous Mormon Tabernacle Choir.