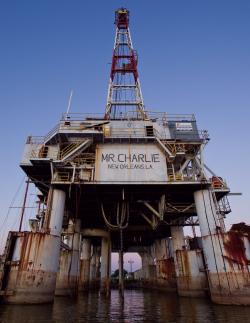 Designed by Alden “Doc” Laborde, Mr. Charlie is the first offshore drilling rig that was fully transportable, submersible and self-sufficient, allowing it to drill more than 200 oil and gas wells along the Gulf Coast between 1954 and 1986.

Laborde, a young U.S. Navy engineer, had the idea that a self-sufficient oil rig could be placed on a barge and floated in 40-foot water depths. The idea was revolutionary, but all of the major companies involved in the oil and gas industry at the time passed on the idea. He made the decision to search for investors and eventually found a partner in Charles Murphy, the owner of an independent oil company from El Dorado, Arkansas.

Construction on Mr. Charlie began in 1952 at Alexander Shipyards in New Orleans and was completed in late 1953. Mr. Charlie would go on to drill hundreds of wells—a cumulative 2.3 million feet up and down the Gulf Coast for Shell Oil, as well as many other oil companies.

By the mid-1980s, offshore drilling activity had moved beyond 40 foot depths, rendering Mr. Charlie ineffective for larger projects. An effort to preserve Mr. Charlie was led by Morgan City oilmen and former workers on the Mr. Charlie. It now serves as an educational museum and training facility.