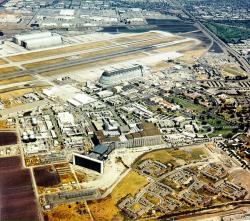 Established in 1939 by the National Advisory Committee for Aeronautics (NACA), and named after NACA’s first chairman, Joseph S. Ames, the center has been at the forefront of American, and worldwide, aeronautics research. From its earliest days, the center has made noteworthy contributions to the field of aerospace engineering and science, such as the development of a wing de-icing system for aircraft that was awarded the 1946 Collier Trophy; the development of the theories of wing sweep, the transonic area rule, and the oblique wing; and the earliest research efforts in subsonic and supersonic aerodynamics, that were instrumental to improving jet flight in the 1950s. Ames Research Center also developed the concept of blunt body reentry vehicles for space exploration, making it possible for astronauts to return to Earth safely from space. In 1958, NACA became the nucleus of the newly-created National Aeronautics and Space Administration (NASA). Under NASA, Ames Research Center continued to make historic contributions to aerospace engineering and science, such as developing multi-use flight simulators; establishing life science research programs in radiation biology, adaptability to microgravity, and exobiology; and researching the complex airflows around rotorcraft, Vertical Takeoff and Landing (VTOL), and Vertical or Short Takeoff and Landing (V/STOL) aircraft, as well as designing the first tilt-rotor aircraft. The center has also contributed research in air traffic management, and managed a series of airborne science aircraft, planetary atmosphere probes, and robotic explorers, such as the Pioneer spacecraft and Lunar Prospector.