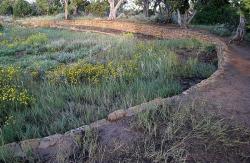 Morefield and Box Elder Reservoirs were valley-bottom structures that captured intermittent stream channel flows. They originated as excavated ponds on the valley floor and both became elevated after the siltation and resultant dredging of years of use. Far View (shown above) and Sagebrush Reservoirs are mesa-top features that captured harvested water. Deforestation and the packing of surrounding ground surface by foot traffic resulted in increased runoff water.