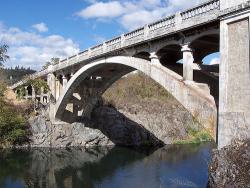 The Rogue River Bridge was the most advanced concrete bridge in America when it was built. Distinguished bridge engineer Conde McCullough employed the techniques of Frenchman Eugene Freyssinet to create thin, graceful concrete arches for this seven-span structure.

Pre-compression of the concrete arch was achieved and, as a result of its success, pre-stressing became one of the hallmarks of American bridge building techniques.

Hydraulic jacks set at the crown of the arches were used to compensate for stresses induced by rib shortening, concrete shrinkage, temperature differentials, and movement of the fixed-end supports. These factors had previously been thought to limit the concrete arch to unyielding foundations, relatively short spans, or high rise-to-span ratios.