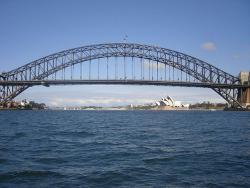 The design of the Sydney Harbour Bridge closely resembles the Hell Gate Bridge over the East River in New York City, conceived in 1916 by noted engineer Gustav Lindenthal and his chief assistant, O.H. Ammann.

The Sydney Harbour Bridge, with a span of 1,650 feet, is not only the longest single-arch bridge ever built outside of the United States; its 160-foot width - enough to carry eight lanes of automobile traffic, two sets of train tracks, a bicycle path, and a pedestrian walkway - also qualifies it as the widest long-span bridge anywhere in the world. Seated at the mouth of one of the world's most beautiful harbors, the bridge is a massive engineering achievement and a dramatic statement of Australia's standing among the leading nations of the 20th century.

The bridge and its approach spans, totaling 2 3/4 miles in length, required 52,000 tons of steel and more than 6,000,000 rivets to construct, in a job that lasted nine years. A pair of 285-foot granite-faced pylons at each end of the main span help anchor the bridge and add to its aesthetic appeal. Guided tours from a visitor's center and museum housed in one of the bridge's pylons allow intrepid climbers to cross the very top of the bridge's twin arches.