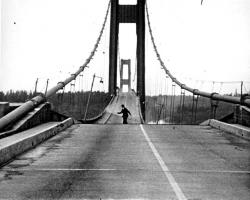 Taken together, the 1940 and 1950 Tacoma Narrows bridges mark a significant turning point in the design of long-span suspension bridges. The original 1940 structure was designed with one of the shallowest and narrowest stiffening elements of any long-span suspension bridge yet built. The structure failed dramatically in a rather moderate 42 mph windstorm on 7 November 1940, only four months after opening for traffic. The still and motion pictures that captured this event still today send a chilling reminder to engineers everywhere that pushing the limits of design must be done with great care. Although no human life was lost, the failure brought immediate crisis to suspension bridge engineering. The investigations and research prompted by the failure led to the use of more conservative designs for the stiffening element and various other means of improving aerodynamic stability for all future long-span suspension bridges. The replacement 1950 bridge, constructed on the piers of the 1940 structure, was among the first to employ these revised and new concepts.

The 1940 bridge was initially designed by Clark Eldridge, of the Washington State Highway Department, an engineer not considered among the elite for that type of design. Eldridge's design followed well-established practices and was quite conservative. The estimated cost, however, exceeded the state's funding ability, forcing the state to seek federal funding. The federal funding agency dictated that a suspension bridge specialist, Leon Moisseiff, be retained to review the design and develop a less expensive configuration. Moisseiff was a proponent of the trend in the 1930's to design suspension bridges with much more slender stiffening deck structures. The 1940 bridge design thus became one of the most slender designed to date, much to the objection of Eldridge. It was the very slender deck and a general lack of knowledge of aerodynamic forces on such a structure that resulted in the dramatic failure. The incident essentially ended Moisseiff's engineering career; he died of heart failure at his summer home in New Jersey 3 September 1943 at age 71.

The failure triggered a world-wide response by bridge engineers to evaluate other existing suspension bridges and take measures to minimize potentially dangerous oscillations. An Advisory Board on the Investigation of Suspension Bridges, made up of leading U.S. suspension bridge engineers, convened from 1942 to 1954 to better understand and identify design measures to counter the aerodynamic effects of wind. Concurrent with these studies were a series of wind tunnel tests at the University of Washington in Seattle. The tests helped engineers understand the reasons for the failure and identified various design concepts that would assure a safe replacement bridge for the Tacoma Narrows crossing.

The replacement 1950 structure incorporated a deeper and wider stiffening truss as opposed to the much more shallow, solid plate girder specified by Leon Moisseiff. Also, the deck was designed with several longitudinal slots covered by steel grating to allow air passage vertically through the deck, and hydraulic dampers were installed in various locations. Other than for these special features, the design was similar to what Eldridge had originally proposed. The original 1940 piers and cable anchorages were undamaged and were incorporated in the new design. No wind damage has occurred to the structure so the new design concepts have served as intended.

In response to increased traffic, a new parallel suspension bridge was opened in 2007 to the south of and adjacent to the 1950 span. Apart from carrying only westbound traffic, the 1950 Tacoma Narrows Bridge exists much as it did when originally opened.

Tags
Bridge
Taken together, the 1940 and 1950 Tacoma Narrows bridges represent both tragedy and triumph for civil engineers. The original Tacoma Narrows Bridge failed dramatically in a windstorm on November 7, 1940, four months after opening. The lessons in aerodynamics learned from this failure generated new knowledge necessary to build safe, efficient, and stable suspension bridges worldwide.
Image Caption
Howard Clifford running off the Tacoma Narrows Bridge during collapse