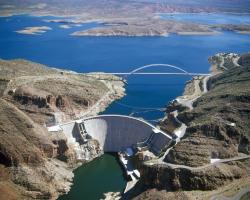 The first electric power generated by the Theodore Roosevelt Dam for commercial use was transmitted over a high-voltage line to Phoenix, where it was employed to operate the city's new streetcar system.

The Salt River Project, including the Theodore Roosevelt Dam, was the first major public works project in the American West to demonstrate that large-scale reclamation of arid land was both possible and practical. Authorized by the Secretary of the Interior in 1903 under the recently passed Reclamation Act, the Salt River Project ultimately led to the irrigation of more than 250,000 acres surrounding metropolitan Phoenix. It also became the first federally funded flood-control project to incorporate the generation of hydroelectric power.

The initial phase of the project involved construction of two major structures: the Theodore Roosevelt Dam, on the Salt River approximately 75 miles northeast of Phoenix, and the Granite Reef Diversion Dam downriver approximately 30 miles. Standing 280 feet high and incorporating more than 355,000 cubic yards of masonry, the Theodore Roosevelt Dam was one of the largest dams in the world when it was completed in 1911.