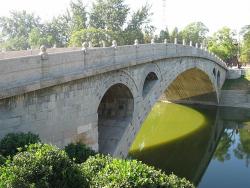 Ancient Chinese literature refers to the Zhaozhou Bridge as a "crescent moon rising from the clouds" or a "rainbow in the sky."  Throughout its history, it has been known as the Anchi or Anji Bridge (literally "safe crossing"), the Dashi Bridge ("big stone"), and the Dashiqiao ("great stone") Bridge.

The Zhaozhou Bridge crosses the Jiaohe River in the Hebei Province of China and is the country's oldest standing bridge. It is also the world's oldest open-spandrel arch bridge. There are smaller arches at each end of the bridge that transmit the load of the deck down to the main arch. The open spandrels allow some water to flow over the main arch when the river floods.

The Zhaozhou Bridge was designed and constructed during the Sui dynasty by the master architect and stonemason, Li Chun. It has a span length of 122.6 feet and a total length of 167 feet. The rise is only 23.9 feet, providing a low profile. It is comprised of 28 thin, curved limestone slabs, joined with iron dovetails so the arch could gently yield and adjust to the rise and fall of the abutments as they responded to the weight of traffic.

The bridge remains in use today, though the balustrades (the ornamental posts and railings) have had to be replaced every 300 to 500 years.