Belle Fourche, meaning "Beautiful Forks" in French, refers to the confluence of the Redwater and Belle Fourche Rivers. The gold rush to the Black Hills in 1876 brought many people to the area, but agriculture and livestock soon became the principal industries. Farmers and civic leaders recognized the need for a reliable source of irrigation water in this semi-arid region and petitioned the Federal government for funds to build an irrigation and flood control system.

When completed, the Belle Fourche Dam was the largest homogeneous, rolled-earth fill dam in the world. Belle Fourche has also been known as the Orman Dam and the Owl Creek Dam. 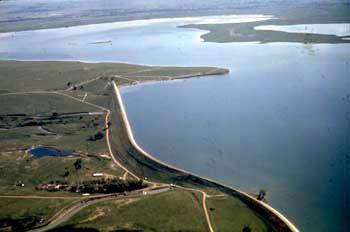 confluence of the Redwater and Belle Fourche Rivers