John Vincent Atanasoff conceived basic design principles for the first electronic-digital computer in the winter of 1937 and, assisted by his graduate student, Clifford E. Berry, constructed a prototype here in October 1939. It used binary numbers, direct logic for calculation, and a regenerative memory. It embodied concepts that would be central to the future development of computers. "It was at an evening of bourbon and 100 mph car rides," Atanasoff said, "when the concept came, for an electronically operated machine, that would use base-two (binary) numbers instead of the traditional base-10 numbers, condensers for memory, and a regenerative process to preclude loss of memory from electrical failure." Atanasoff wrote most of the concepts of the first modern computer on the back of a cocktail napkin. Then, in late 1939, John V. Atanasoff teamed up with Clifford E. Berry to build a prototype. They created the first computing machine to use electricity, vacuum tubes, binary numbers and capacitors. The capacitors were in a rotating drum that held the electrical charge for the memory. Berry, with his background in electronics and mechanical construction skills, was the ideal partner for Atanasoff. The prototype won the team a grant of $850 to build a full-scale model. They spent the next two years further improving the Atanasoff-Berry Computer (aka ABC). The final product was the size of a desk, weighed seven hundred pounds, had more than three hundred vacuum tubes, and contained a mile of wire. It could calculate about one operation every fifteen seconds, today a computer can calculate 150 billion operations in fifteen seconds. Too large to go anywhere, it remained in the basement of the physics department. The war effort prevented Atanasoff from finishing the patent process and doing any further work on the computer. When they needed storage space in the physics building, they dismantled the Atanasoff-Berry Computer. 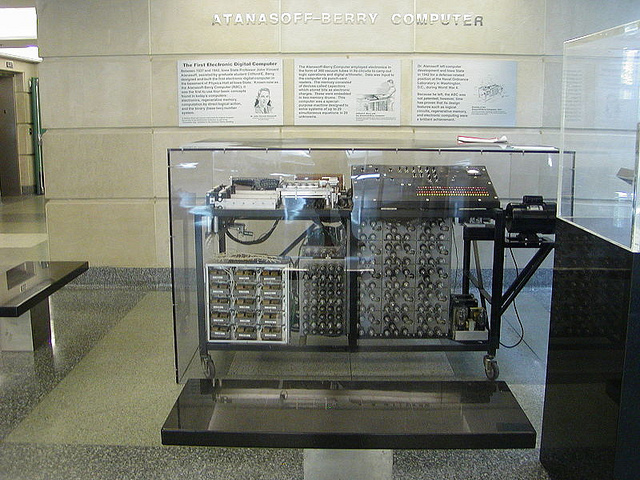