In 1903, Eiffel built a device to test the drag on various bodies by dropping them along a vertical cable hung from the second level of the tower that bears his name. He built a machine that accurately measured drag during the fall and recorded it on a chart within the machine. He tested about 40 shapes this way over the next three years.

Wanting longer test times, Eiffel built a wind tunnel next to the tower (to use power from its generator) in 1909. In it he tested many of the same shapes he had dropped, confirming the theory that air moving around a stationary body produces the same drag as the body moving through still air. This tunnel also tested models of entire airplanes for the first time.

Eiffel expanded his research considerably when he opened his Auteuil laboratory in 1912. It featured two wind tunnels that utilized a common test chamber. Eiffel's test chamber allowed either jet of air to flow across the closed room and past a test object without interference from sidewalls, improving accuracy over earlier designs. Flared inlet and outlet ducts improved the efficiency of these tunnels and minimized their power requirement. These two features were adopted in many later wind tunnels. The smaller tunnel was dismantled in 1933, but the larger one remains, making Auteuil the oldest surviving aeronautical laboratory with its original wind tunnel intact.

The tunnel was donated to the French government (Services Techniques de l'Aéronautique) in 1920 when Eiffel was 88 years old. It has been operated without interruption since its inauguration and continues to be used for testing airplanes, buildings, and racing (F1) cars. It has been designated a French National Monument. The Eiffel drop test machine is exhibited in the lobby of Aérodynamique Eiffel.

Gustave Eiffel became an Honorary Member of ASME in 1886. 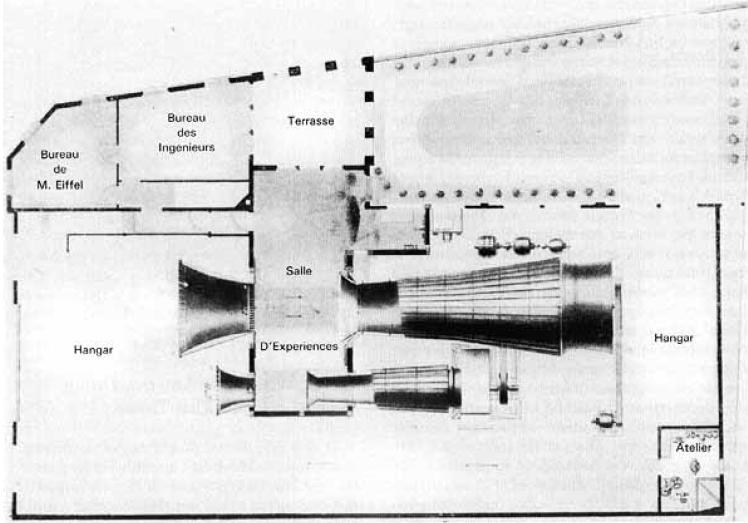