Originally known as the Coolgardie Goldfields Water Supply Scheme, the Goldfields Water Supply, Western Australia, has exceptional and unique cultural significance for Australia.  Western Australia's first Premier, the dynamic and visionary Sir John Forrest, recognized the need for this extraordinary project to support the young and burgeoning gold mining industry in the dry interior of the state.  In 1896 he directed C Y O'Connor, the colony's first Engineer-in-Chief, to find a permanent solution to the water supply problem in the area, which lacked any permanent surface water supplies and was the destination of thousands of hopeful prospectors.  O'Connor was a brilliant civil engineer who had gained distinction early in his career engineering many of the first roads, railroads and ports in neighboring New Zealand.

O'Connor, aided by his Engineer-in-Charge, Thomas C. Hodgson, a highly experienced hydraulics engineer from the state of Victoria, conceived and oversaw the design and construction of what he called a "pumping scheme".   When it was completed in 1903, a year after O'Connor's death, the scheme, with its impounding weir at Mundaring, 40 kilometers (25 miles) east of Perth, a 566 kilometer (352 mile) pipeline to Kalgoorlie and eight, large steam pumping stations, was recognized internationally as an engineering achievement of world significance. It was at that time the longest water main in the world and the first major pipeline in the world constructed of steel.

In 1903 Kalgoorlie's population reached 30,000. The town boasted 93 hotels and eight breweries. At that time, half of Australia's gold came from Western Australia and the nation had become the world's largest producer of gold.

The Goldfields Water Supply is a highly significant element in the pattern of population, development, economics and resource exploitation in Western Australia and the nation. It has been the lifeline to the Eastern Goldfields gold and nickel mining provinces which have made an enormous contribution to the prosperity of the state and nation over the past one hundred plus years. The extension of the scheme has also had a significant impact on the development of the Western Australian agricultural region.

Following the introduction of electric arc welding in the late 1920s, Norman Fernie, GWS District Engineer at Northam, in 1932 initiated experimental pipeline diversions in which leaded joints between pipes were replaced by welded joints. Provision was also made for anchoring the diversions against thermal and dynamic movements. The success of these experiments led to the construction of a continuously welded trial section of the operating pipeline which was monitored over a period of one year.

Thus when the losses from leaks in the main conduit had reached a record level in 1932-1933 and, coinciding with the economic Depression, the Government of Western Australia authorized  the establishment of a labor force which systematically lifted the original below ground pipeline and converted it to a continuously welded above ground version. 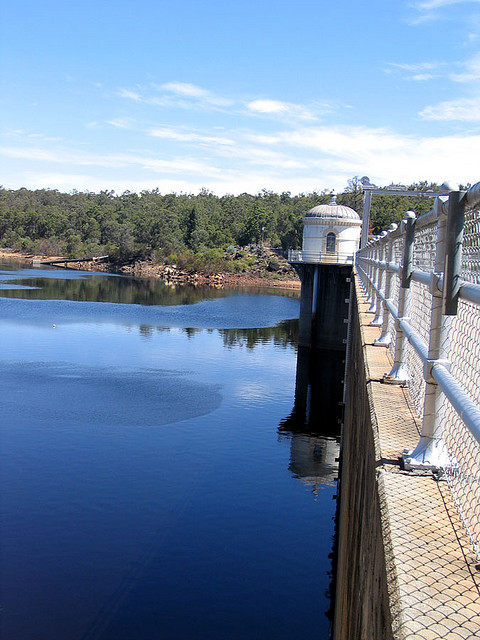