The Manhattan Bridge originally carried four lines of trolley traffic, four lines of elevated trains, two carriage lanes, and two pedestrian walkways, making it among the most heavily loaded bridges ever built. The upper rail lines and central carriageway have since been converted for automobile traffic, and the trolley lines have been converted to carry subway lines.

Beginning with its initial conception in 1899, the design of the Manhattan Bridge spanned many years, went through several major revisions and involved some of the most significant bridge engineers of the early 20th century. Of particular note is the design proposed by Bridge Commissioner Gustav Lindenthal in 1903 for an eyebar chain suspension bridge. This proposal led to a debate over the engineering merits and economy of eyebar chains vs. wire cables in both professional journals and the local newspapers. Ultimately the controversy led to the involvement of political entities, including Mayor Seth Low and Tammany Hall. The dispute was finally settled with the election of Mayor George McClellan in 1904 and the appointments of R. S. Buck and O. F. Nichols as engineers for the bridge. The architectural firm of Carrere and Hastings contributed to the design of aesthetic elements for the bridge.

The Manhattan Bridge was the first major suspension bridge designed using the recently developed "deflection theory" in order to achieve unprecedented economy in the stiffening trusses.  The deflection theory accounts for the stiffening effect of the tension in the main suspension cables. These calculations were performed by Leon Moisseiff, who would go on to become one of the preeminent suspension bridge designers of the first half of the 20th century.

The Manhattan Bridge introduced the innovations of shallow stiffening trusses and slender towers, both of which directly contributed to the rapid development of suspension bridges in the early 20th century. 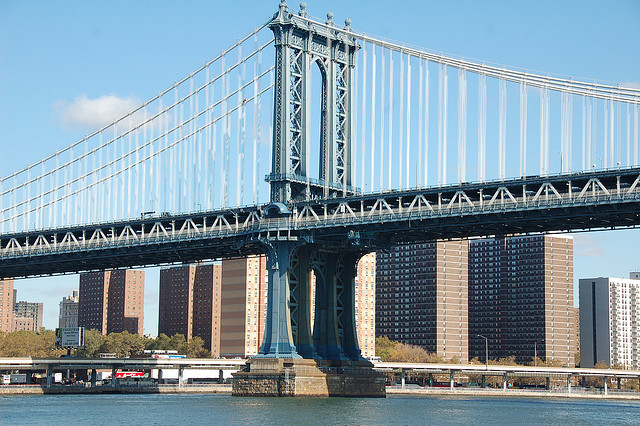