A bridge across the Hudson at or near Poughkeepsie was planned starting in the early 1870s to primarily carry coal from the coalfields of northeastern Pennsylvania to New England. At the time there were no bridges between Albany and New York Harbor. Horatio Allen, soon to be President of the ASCE, was its first Chief Engineer. He designed a multiple span suspension bridge. Later the American Bridge Company started construction on a five span bridge but went bankrupt before it completed the first pier foundations. The Keystone Bridge Company, under Jacob Hays Linville, next designed a bridge with five - 525 ft. spans but funding ran out again. It remained for the Union Bridge Company under Charles Macdonald and Thomas C. Clarke to design and build the bridge in the late 1800s. Both of these men would later be Presidents of the ASCE. Their design was for a cantilever bridge similar to one they had built across the Ohio River between Kentucky and Indiana. It consisted of two fixed anchor spans in the river and three cantilever spans as well as two anchor spans at the banks of the river. In addition, it had very long approach steel approach spans.

The bridge opened for railroad traffic in 1889 and at the time had the longest simple span, 525 ft., truss as well as the longest cantilever span 548 ft. in the United States. The false work required on the mid river anchor spans was the highest undertaken at that time. With the track level 212 ft. above the river along with a deep river and soft river bottom the height of false work from pile tip to working level was 340 ft. With a total length of 6,767 ft., it was for a short time the longest bridge in the world.

The Poughkeepsie Eagle wrote at its opening: "Among the great bridges of the world the one just erected at Poughkeepsie, and now thrown open for use, is not surpassed by any other completed bridge in magnitude, boldness of design or beauty of shape and situation. The great bridge over the Firth of Forth, Scotland, will, when finished, be larger, but with this exception the Poughkeepsie Bridge is without an equal in the world."

In 1905-06 the main bridge was reinforced with a new truss placed between the original two trusses to provide of two tracks. The bridge was used until 1974 when a fire on one of the approach spans shut it down. No work was done even though many plans were prepared to return it to service. Ownership changed several times over the years with railroad consolidations, etc. but still no work was done. In 1993 a non-profit group, later named Walkway Over the Hudson, was formed to convert the railroad bridge into a pedestrian bridge. These efforts were finally successful when the Walkway Over the Hudson organization obtained state and federal funding along with private funding, primarily by the Dyson Foundation. The bridge rehabilitation engineer was Bergmann Associates from Albany and the Contractor Harrison and Burroughs Bridge Company from Glenmont. In addition, Fort Miller Concrete from Greenwich cast all of the precast deck panels. It was, therefore, a local effort.

With the adaptive reuse of the bridge as a walkway over the Hudson, it will continue to serve for many years to come as an example of 19th century bridge engineering and as a 21st century example of a conservation and preservation ethic. 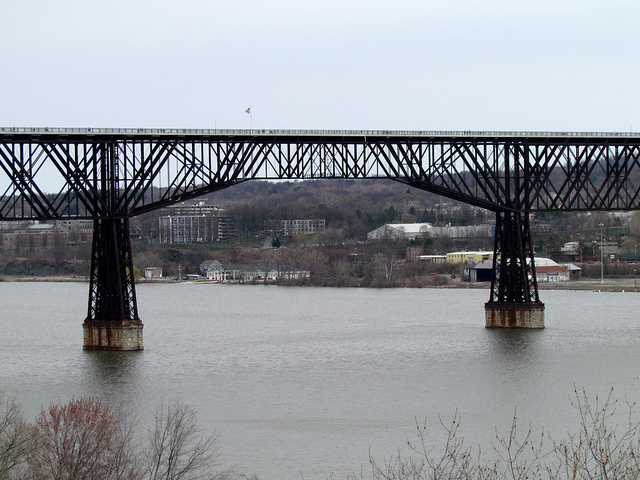