The Tennessee State Capitol, the first and only home of the Tennessee General Assembly, was designed by engineer and architect William Strickland. Since its construction, it has ably served, with little modification, as the seat of Tennessee's government.

For a relatively poor agricultural state, construction of the capitol at this time was a massive undertaking. In order to avoid bankrupting the state, this project would need to start with a good design and maintain careful supervision of the construction. The renowned Philadelphia engineer and architect, William Strickland, was selected to design the building and supervise the construction.

At the age of 14, Strickland apprenticed under Benjamin Henry Latrobe, one of the designers of the U. S. Capitol. After leaving Latrobe's office, he produced many notable buildings and engineering works such as the Bank of the United States building in Philadelphia and plans for a canal from the Chesapeake Bay to the Delaware River. The Tennessee State Capitol is the last of Strickland's buildings completed and arguably his finest.

For this project, Strickland combined one of the most ancient building materials, monolithic cut stone, with one of the newest at the time, structural iron in order to make it as "fire-proof" as possible. The limestone used was quarried about a mile from the Capitol site. They used massive wood timbers to construct derricks to hoist the stones into place. Many of the interior columns of the building are one piece of stone. At this time, it was unique to use of limestone for both the exterior and interior walls.

At a time when most bridges were still being made out of wood, Strickland specified that iron was to be used for the roof trusses. The trusses are constructed of wrought iron instead of the cheaper cast iron due to wrought iron's superior mechanical properties as compared to cast iron. In addition to producing roof trusses that have performed reliably over the years, this project introduced the local iron industry to the material's engineering uses and spurred the development of the iron industry in Tennessee.

By 1860, the building was essentially complete; therefore, the state turned its attention to the grounds. J. A. Hayden, a local civil engineer, was contracted to produce a topographic map of the grounds for the purpose of estimating excavation and fill required for grading. In October 1860, the state accepted William Prichard's (a local landscape gardener) plan for the grounds. However, due to lack of funds, work on the grounds was halted in April 1861 - just prior to the start of the Civil War. In 1870, the legislature approved completion of the grounds. Unfortunately, only a portion of Hayden's 1860 survey could be found. In order to complete the work, John Bogart, a civil engineer from New York City, was hired to produce a suitable scheme. Upon completion, these public gardens were an early example of a large public park in Tennessee and set the standard for park development in the region. 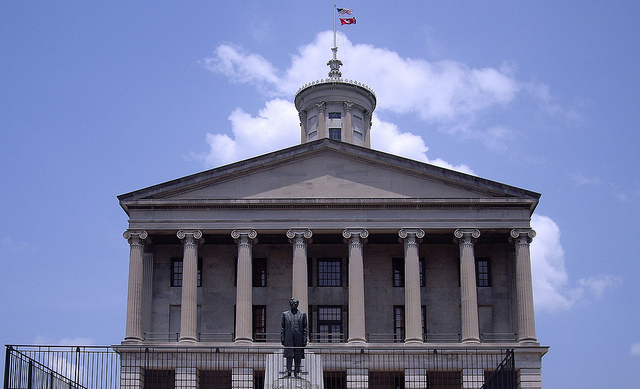