The Voyager explorers, which provided scientists and the world with the first detailed pictures of faraway planets, were designed and tested during 1972 to 1977. The two most intelligent machines ever built in the NASA space program, the explorers were launched from Cape Canaveral, Fla., in 1977. Voyager 2 was launched first on August 20, followed by Voyager 1 on September 5.

The Voyagers encountered Jupiter in 1979 and delivered photographic data that attracted worldwide attention and interest. Among several fascinating discoveries are a thin ring of dusty debris around the planet and extensive volcanic activity on the moon, Io. Voyager's interplanetary mission continued to Saturn where both spacecraft photographed that planet's famous rings. Scientists learned that the rings are composed mostly of water ice and feature spoke patterns and other unusual formations. Voyager 2 encountered Uranus and Neptune in 1986 and 1989, respectively. Today, both Voyager 1 and Voyager 2 are exploring the fringes of the solar system for possible clues to the mysteries of the universe and are expected to return useful data well into the 21st century.

Each 1825-pound Voyager is powered by three thermoelectric generators that produce energy from the radioactive decay of plutonium. Each spacecraft carries three types of computers that provide system control and stability, process data, and perform other critical activities. Voyager also includes advanced fault protection algorithms that allow the craft to automatically correct problems during flight, making Voyager virtually independent of Earth. NASA engineers incorporated much of Voyager's technology into the Magellan, Galileo, and Mars Observer. A representational display is open to the public. 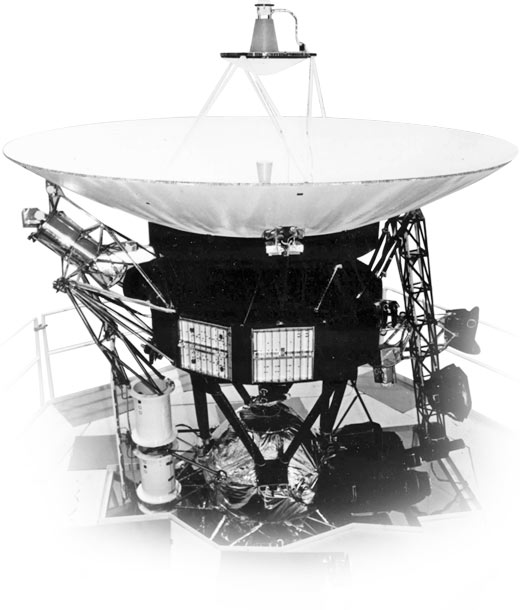