The construction of these arches presented a number of challenges. Since Seventh Street intersected the St. Paul and Duluth Railway right-of-way at a 63-degree angle, the bridge required a skewed, or "oblique," design, which, even under ideal conditions placed extra demands on engineer, stonecutter, and mason alike. In addition, the Seventh Street Arches were intended not only to carry pedestrians and vehicular traffic, but also sewer and water pipes, which required a substantial layer of fill. While there were other methods for building a skewed stone-arch bridge, Truesdell didn't think that they would be adequate to the task. He rejected the ribbed arch plan because such a structure would have been unstable for the locality on account of the great weight of earth the arches would have to sustain. In addition, he believed the classical French method of skewed construction where the wedged-shaped stones (voussoirs) are custom cut in a variety of shapes to fit the configuration of the arch would have required a great many of patterns and would have cost too much.

One alternative method still remained - the helicodial, or spiral, method. The helicodial method was first introduced by the English architect and mathematician Peter Nicholson in 1828. Truesdell, who studied mathematics as a hobby, took on the challenge of determining the shape of the stones using geometry. However difficult the calculations were, the advantage of this method was once the geometry was calculated all of the wedged-shaped stones making up the arch were the same except for the ring stones.

Upon Truesdell's death in 1909, his professional colleagues remembered his achievement. In the Associations of Engineering Societies Journal, they described the skewed, helicoidal, stone arch design as "the most important piece of masonry in the city." It is currently one of the only documented examples of helicoidal arch construction in the United States and the only known example in the State of Minnesota. 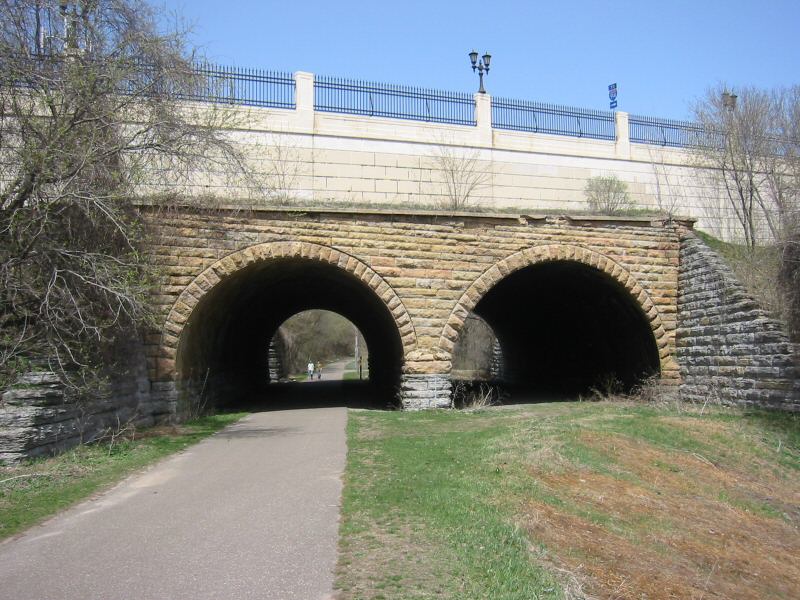