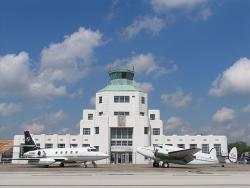 The terminal, designed by noted architect Joseph Finger and built by the Works Progress Administration, is a rare remaining example of classic art deco airport architecture, featuring the distinctive design elements of that age: step forms, sweeping curves, and intricate geometrical patterns and motifs. Opened on September 28, 1940, the terminal was Houston’s gateway to the world, and served the fleets of Braniff Airlines and Eastern Air Lines.