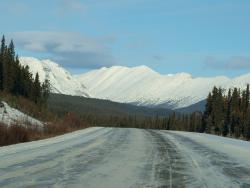 The Alaska Highway, initially called the Alaskan-Canadian (Alcan) Military Highway, provided an essential transportation link to the Yukon and Alaska during World War II. It begins at the junction with several Canadian highways in Dawson Creek, British Columbia and runs to Delta Junction, Alaska, via Whitehorse, Yukon. After the shock of Pearl Harbor, the Alaska Highway was a first step in America's defense strategy -- a vital military supply line during the war. Over ten thousand Army Engineers were rushed to the far Northwest. Their mission was to blaze a road to Alaska in less than a year. They battled mountains, muskeg and mosquitoes on a front that stretched across miles and miles of rugged, sub-Arctic terrain. To this day, it has remained the only transportation link to the Yukon and Inuvik Region of the Northwest Territories. Built in 1942 in just eight months, the 2500 km (1570 miles) highway was a significant feat of time critical engineering and construction. Besides being completed much sooner than expected, the Alaska Highway was the largest undertaking at the time for a northern construction project. It still remains one of the largest northern construction projects to this day. During the project's construction, significant experiences were gained in Arctic engineering and construction, particularly in permafrost. The Alaska Highway provided an opportunity for the development and refinement of cold region engineering roadway construction techniques and construction supply techniques. In addition to increasing knowledge in the field of cold region engineering, it enabled the development, settlement and economic growth of millions of acres of land. The highway also became the basis for a substantial tourism-based economy. Resources 1.Twichell, Heath. Northwest Epic: The Building of the Alaska Highway. New York: St. Martin's Press, 1992. 2. Remley, David A. Crooked road : The story of the Alaska Highway. New York, McGraw-Hill, 1976.