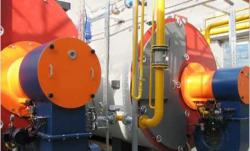 Published in 1914-15, the ASME Boiler and Pressure Vessel Code (BPVC) was the first comprehensive standard for the design, construction, inspection, and testing of boilers and pressure vessels. With adoption in the United States and use in many countries, it has contributed significantly to public safety and influenced the continued development of boiler and pressure vessel technology.

After less successful attempts to standardize boiler manufacture and use, ASME undertook the creation and maintenance of the Boiler Code through a volunteer structure involving manufacturers, users, government agencies, and other interested groups. It was proposed in 1911 by then ASME president Colonel Edward D. Meier, president of Hiene Boiler Company and active member of the American Boiler Manufacturers Association. The Committee was chaired by John A. Stevens, consulting engineer and past member of the Massachusetts Board of Boiler Rules.

Today the ASME Boiler Code is an American National Standard, which has historically influenced public safety, product reliability, and industrial efficiency. It reflects and has spurred the growth of cooperation and research efforts among industrial groups, and it has contributed to the stability of contractual relations, certification, and the insurance industry. Through the years the Code has been expanded in scope and geographical application. Since 1972, it has been a de facto International Standard and the basis of an international accreditation program.

More extensively used than ever before, the BPVC affects such industries as public utilities, construction, materials engineering, chemical and food production, nuclear power generation, petroleum processing, and industrial manufacturing. The initial report was published in the 1914 edition of ASME Transactions (1915). The existing artifact is a 1918 edition at ASME headquarters in New York, on loan to the Henry Ford Museum.