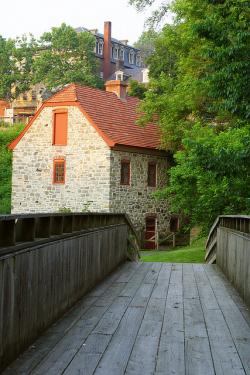 The first known pumping system providing drinking and wash water in the North American colonies. The building (still standing) is dated 1761, but it was preceded by an experimental frame building dated 1754. Before the Bethlehem built its system, assigned carriers would daily haul water up the hill from a well near the city gate. A wooden waterwheel, driven by the flow of Monocacy Creek, drove wooden pumps which lifted the water through wooden pipes to the top of the hill where the water was distributed by gravity.

The system was considered state-of-the-art at that time and served as a model for later waterworks projects. George Washington and other early American leaders considered making Bethlehem the nation's capitol, in part because of the technological leadership exhibited by the city's water system. Architecturally, the waterworks building, which still stands today, is distinctive. It is made of hand-hewn limestone with Moravian brick arched windows.